I have a collection of favorite holiday desserts.  But I thought I’d experiment with a new one this year.  I’ve take Granny Smith Apples, Anjou Pears, Cranberries and the juice and zest of a Naval Orange and made a new holiday pie for this season.  The recipe uses my mom’s cream cheese crust, which is rather foolproof.  And, you can make this the traditional way, with a simple top crust.  But, I tried to get a little creative with a double braided lattice work crust.  The finished result is cool, but the work involved wasn’t quite worth it.  So, I’m providing the basic recipe here with the simple top crust and detailed the steps if you want to try this fancy version.  Either way, I think you’ll really enjoy the pie!

Prepare pie crust by placing ingredients in a food processor and processing until dough comes together. Transfer all ingredients to a clean surface and form into two balls. Flatten them down to large disks with about a 6” diameter and cover tightly with plastic. Refrigerate for at least an hour. If you don’t have a food processor, use a pasty cutter to mix ingredients together and then work with your hands until dough comes together. Special Note: If you are going to make a fancy top crust, you may need to make another half recipe of this dough. 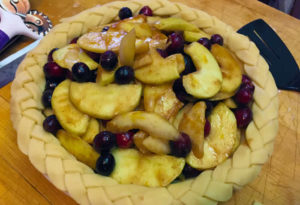 Preheat oven to 350 degrees. Peel, core, and thinly sliced apples. Place in a large bowl and mix with orange juice. Peel, core and thinly slice pears. Add to apple mixture. Add cranberries and toss to combine. In a separate bowl, mix sugars, flour, cinnamon, nutmeg, and orange zest. Pour mixture over fruit mixture and mix with your hands to combine.

Roll out one pie crust and transfer to a pie pan, allowing the edges to extend over the sides. Tightly arrange the fruit mixture in the crust, breaking pieces of apple if necessary to arrange as compactly as possible. Dot the top with pieces of the butter. 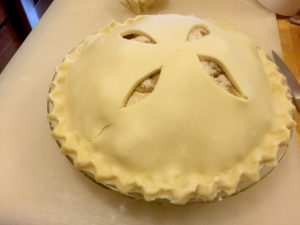 Roll out second crust. Cut four to five teardrop shapes (about 1 1/2 inches long) around the center to vent pie as it cooks. Place crust over the filling, allowing edges to extend over lower crust. Cut away excess dough that extents beyond about 1/2” from rim of the pan. Crimp the two crust edges together using your fingers. If you want to use the additional scraps of crust leftover, make decorative patterns and apply to the crust.

*Alternatively, you can create a more imaginative top crust by creating a lattice pattern over the center of the pie and two braids around the circumference accented with flower patterns. I’ve done this version once and haven’t done it since. It’s really labor intensive and the dough is fragile and often breaks while making the braids…so proceed at your own risk (and skill level). You will need an additional crust to create this version, so make an additional half version of the crust recipe above. Detailed directions are listed below.

Brush the top with egg wash and lightly sprinkle sugar, nutmeg and cinnamon on top. Loosely tent pie with aluminum foil and place it on the middle rack of the oven. Bake for 45 minutes. Remove aluminum and bake for an additional 15-20 minutes until crust is golden brown. 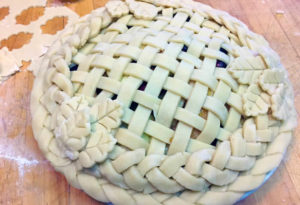 To make the fancy crust, you’ll need to start with a two crust recipe. Divide the dough into 3 equal portions and wrap each in plastic until ready to use.

First, make the outer braid. Roll out one piece of dough into a 9” x 14” rectangle. Cut 9 long strips, each 1/2” wide. Take three strips and braid them into a long braid. Repeat with the other two sets of three. Take the filled pie crust and trim the edge of the curst right at the lip of the pie pan. Moisten the flat surface of crust with a bit of water and place the braids on top of the flat crust, pressing gently so that it seals onto the flat dough. don’t worry about the ends of the braids, you’ll be adding decorative pieces on top. Save any scraps of dough.

Second, make the lattice work for the center of the pie. Roll out the dough into a 10” x 14” rectangle. Cut 1/2” strips. Lay one strip across the center of the pie. Lay a second one across the center of the pie perpendicular to the first. Lay two more strips on either side of the first strip. Then add two more strips parallel to the second, but lift the third and forth strips and place these under them to create a weave pattern. Continuing adding strips in both directions weaving them in and out of each other. When you’re reached, the end, trim all the excess dough right against the inside edge braid.

Now, make the inner braid. Roll out one piece of dough into a 9” x 14” rectangle. Cut 9 long strips, each about 3/8” wide. Take three strips and braid them into a long braid. Repeat with the other two sets of three. Moisten the flat surface of lattice work near the outer braid with a bit of water and place one of the braids on top of the flat crust, matching the starting point of one of the outer braids pressing gently so that it seals onto the flat dough. Trim the end of the braid at the same point as the end of the outer braid. Set aside the extra dough, you’ll be using it. Repeat with the other braids.

Take all remaining dough and roll it out on a work surface. Using a pastry cutter or leaf pattern stamps, cut leaf or pattern shapes. Place these over the three seam location of the two braids, covering all ends. Use as many pieces as you like.

At this point, you can finish the recipe as described above.

We're not around right now. But you can send us an email and we'll get back to you, asap.